Holiday Baking can be overwhelming when you’re new to gluten free baking.  The selection of flour varieties and how to create a flour blend that mimics regular wheat flour can be so confusing!

Gluten-free baking requires a fun science mixture blend of at least two flours – one of which is usually a starch flour. Starches help rebuild the binding, texture, and structure that gluten typically provides.  Flours can be separated into three categories based on how dense and nutritious they are and how they are to be combined.  Here are some of the most common gluten free flours to help you with your holiday baking.

These are all starches – a must when creating a blend of gluten free flours:

Arrowroot Powder is an easy to digest starch that is extracted from a combo of several plant rootstocks.  It can also be used as a healthier substitution for cornstarch to thicken sauces and gravies and best used as a thickener for roux’s, sauces and fillings for fruit pies. This is also an excellent substitution for those who are allergic to corn.

Corn Flour or Starch is ground from corn and makes a great binder and thickener.  After corn kernels have been dried, soaked in water, and then washed, the corn is ground into a fine flour.

Potato Starch has the ability to add moisture into baked goods and like all gluten free flours, potato starch will not substitute directly for wheat. It needs to be combined with other flours and starches in a blend.

Tapioca Starch is extracted and bleached from the cassava root (a plant originally from Asia). Tapioca starch is typically used as thickening agent. It’s commonly used because it has the ability to bring a certain lightness in texture to baked goods. 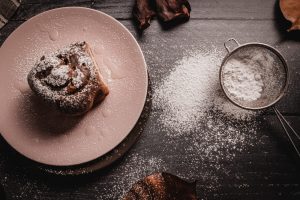 Though nutritious on their own, these flours are more stable when paired with a starch:

Bean flours are made from dried beans and can be ground into flours as easily as grains can. Chickpea flour (also known as garbanzo bean flour) is one of the best result-producing gluten-free flours, the only catch is its very distinct bean flavour.  This flour yields a nice rise and has a distinct flavour.

Millet has a dry, slight nutty flavour and is predominantly a starchy grain with protein content that is similar to whole wheat flour.  Mild and slightly sweet, millet is an adaptable grain. It soaks up the tastes of the foods surrounding it.  It also lends a crumbly texture to breads and muffins, and it is especially good in quick breads.

Oat Flour is rich in vitamins and fiber and yields a nice even flavour, giving a great rise to your baked goods. It can be used alone or in a combo with other flours.

Quinoa Flour has a very distinct flavour and can work alone or in combo with other flours. It’s nutritious, dense with minerals and vitamins and produces great texture. As a grain, quinoa is nutty and delicious. As a flour, quinoa is a little bitter. It is packed with protein, however, and the texture adds density to gluten-free baked goods.

Guar gum grows in India and is a granular flour made from guar beans that have been  dried and ground. If you look at many processed foods such as commercial ice creams and puddings, you may see guar gum on the list of ingredients. In small amounts, guar gum can be an effective binder, mimicking some of the effects of gluten.

Sorghum tends to mimic the texture and lightness of wheat flour and will give your baked goods a certain tenderness.  It is the closest in texture and taste to traditional wheat flour of any of the gluten-free flours.

Rice flours, whether brown or white, come in three different categories: long-grain, medium-grain, and short-grain. Each type can be ground into rice flour. The starchiness of short-grain rice makes it the perfect candidate for rice flour. Smooth and finely ground, sweet rice flour thickens sauces and gravies so well that no one eating them can tell they are gluten-free

These are the more dense and nutritious flours that are rarely used alone and will need to be used in tandem with another medium-based flour:

Almond flour contains a good amount of protein. This nut meal is a great way to give your baked goods a buttery flavour.  It works best if you add a little into your mix to yield a nice binding result and overall moisture to your recipe.  This and other nut flours (such as chestnut, hazelnut, macadamia and pistachio) add protein and a vibrant taste to gluten-free baking.

Amaranth flour is derived from seeds of the amaranth plant and is denser and more nutritious than most flours.  It can be used alone in low rise baked goods or in combo with a mix of medium flours.   Amaranth has a grassy, earthy taste, so it works best in savory dishes, like pizza dough.

Buckwheat is not derived from wheat but rather a fruit. The flour can give baked goods a nice brown hue, full of nutrition and density.  It needs to be used in combo with a starch and a medium flour, especially for higher rising recipes.

Coconut flour has a great way of absorbing the liquid in a recipe, which is why it needs to be used in smaller amounts and in combo with other flours.

Teff is light and creates a dense texture at the same time so its best used in smaller amounts and in combo with other.  This fine flour (ground from the tiny seeds) almost dissolves in baking, giving it a slightly gelatinous quality. It binds baked goods in a somewhat similar fashion to gluten.

Xanthan gum is loved by chefs as well as commercial food producers – it is often added to salad dressings and frozen foods as a stabilizer as well as gluten-free baked goods. Only a tiny amount (1/2 teaspoon or less) is enough to bind dough for cookies and pie crusts.

Green banana flour is one of the latest flour alternatives to gain traction as a gluten-free baking alternative. Young green bananas are harvested and peeled before their resistant starch transforms into simple sugar as they ripen. The bananas are then carefully dried to preserve their subtle flavor, before being milled into a fine flour with a smooth texture and delicate flavour profile. The final product is rich in gut-friendly, resistant starch.  You can use 25% less green banana flour as a substitute for wheat flour when baking, or it can also be added to sauces, soups or smoothies as a thickener.

As the world becomes more and more aware of the need for gluten-free alternatives, there are sure to be even more options.  If all of this seems overwhelming, not to worry – luckily, gluten free baking blends are available in stores and ready to use in place of flour!